Liz O’Mara and Tony Crocker visited Limhamn and we gathered some of the people who saw the solar eclipse together with us on the Eastern Island in 2010. Somehow we had all become older. Unfortunately Göran couldn’t come since he was in hospital, but we contacted him on the phone.

First we celebrated like usually with champagne, or Spanish cava, talked about future plans for the upcoming solar eclipses. The Antarctical solar eclipse was the last we planned several years ago, and it ended up with me going alone, so now we plan less than a year in advance.

Afterwards we went down to the restaurant Kajuteriet beside the boatclub and had a nostalgic lunch from the old days when eating on the boat between Sweden and Denmark, the famous dish Spätta Öresund with a local beer.

Now we could watch the bridge between Sweden and Denmark. Liz was looking forward to enter the tunnel in Denmark since the bridge seems to end in the middle of the sea.

This was really a good day and now we are looking forward to the solar eclipse of 25 October 2022! 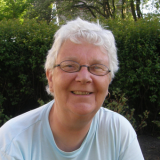 This is Tora Greve's official website for solar eclipses and other astronomical events she is taking part in.