Report from Tora Greve:
Professor Jay Pasachoff asked me to arrange a trip to the Arctic to observe the partial solar eclipse on August 11. So I decided for Kiruna, since the town is being moved because of sinkholes. Besides, it was possible to chase for good weather both into the mountains and to the coast. I made up an itinerary which included:

Saturday 11: Chasing for clear sky, watching the eclipse before noon. 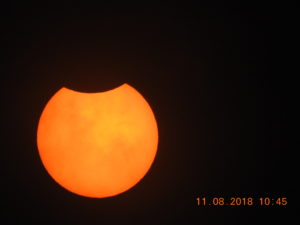 Investigating the city of Kiruna on foot in the afternoon. Dinner at an ethnic Arctic restaurant.

Sunday 12: Visiting the information center of the Swedish rocket center Esrange. Then a tour to Jukkasjärvi to see the Ice Hotel. Dinner at an ethnic Arctic restaurant.

Monday 13: Visiting the Sami Museum if possible before the departure.

We succeeded in finding an open ethnic restaurant Friday and Saturday, but on Sunday only Thai restaurants, pizzerias and hamburger places were open. We ate breakfast at Best Western almost next door to our hotel.

We were seriously chasing the sun along the highway E10, lucky to see the eclipse and even reindeer. On our tour in Kiruna we met some locals with beautiful dogs whom we talked to. We managed to get into the wooden church which will be moved. At Esrange everything was free, both the exhibition and coffee and cakes. We joined the tour in the Ice Hotel in Jukkasjärvi. It was very expensive, but retired people, no matter of origin, paid half price, and we were all retired. The tour was very interesting, we first visited the factory where the ice from the river and lake is stored. One part of the hotel was covered by dirt and plants so the ice was intact during the summer.

The last day the servants returned to our hotel, we got breakfast and was even allowed for free into the Sami Museum before we checked out.
Erik Johansson was interviewed by TV, Tora Greve by SR P4 Norrbotten in connexion with the solar eclipse.